There are three top steamy reads in the Wild Irish Lust Series.

MORE FOR HER follows on from ALL FOR HER and BOTH FOR HER.

MORE FOR HER is the tantalising third novella about the loves and lusts of an Irish lass for identical twin brothers. 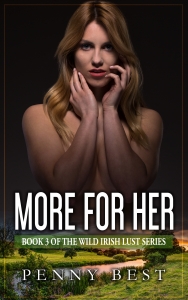 In MORE FOR HER sensuous Minnie Hatton has it all. A passionate and electrifying relationship with hot blooded rugged twin brothers. Living on the Tandy farm at Fern Hollow, Minnie is kept sexually and emotionally satisfied with both identical brothers in her bed.

There is an intimacy to their relationship by book three which I hope electrifies readers. There is an intense love and dark secrets which threatens all.

Can their unique love endure what is revealed now that there is MORE FOR HER?

With more steamy reads on the way I would really appreciate it if readers could leave a review on Amazon or Goodreads. Penny Best’s Naughty Newsletter will keep you up to date with all of whispers about the next top steamy reads from Penny Best @pennybestwriter.

My hot new release, The Devil Comes is available for pre-order now at this link http://shorturl.at/jqsFJ Publishing in ebook on 14th February this forbidden love, marriage of convenience, and enemies-to-lovers romance, promises to heat up your Valentine's Day!

2023 is going to be a big year for Penny Best. Lots of plans and projects are on the go already.

Steamy Short Stories especially for you.
Scroll to top