BOTH FOR HER is the sizzling second novella of the Wild Irish Lust series following on from steamy short story ALL FOR HER. Finishing the series is MORE FOR HER.

So there are three Steamy short stories (in one box set) especially for you.

The initial idea for this series came from a short story about the handsome Irish Tandy twins and their love of the land in rural Ireland. Minnie Hatton became a powerful sexual force in my re-drafting of this short story and she turned on the steam between the other characters. 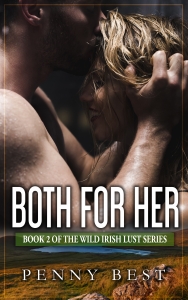 I love to write short stories and read romance and low and behold my first new steamy short story came into being.

Temptress Minnie Hatton falls passionately for the forbidden Tandy twins in 1930s Ireland. Longing to marry secure Edward while keeping Ernest, his hot identical twin as her lover, Minnie must battle a controlling mother and a dark past that left her mute.

This second book asks the questions – Will Minnie ever speak again and can she marry, while keeping her husband’s brother as her secret lover? Tension builds and old family secrets rise and Minnie finds herself torn between following her heart and overcoming all obstacles.

Will love and lust conquer all?

Can she really have them BOTH FOR HER?

Find these three steamy short stories especially for you in this box set.

And you can subscribe to Penny’s naughty newsletter here!

My hot new release, The Devil Comes is available for pre-order now at this link http://shorturl.at/jqsFJ Publishing in ebook on 14th February this forbidden love, marriage of convenience, and enemies-to-lovers romance, promises to heat up your Valentine's Day!

2023 is going to be a big year for Penny Best. Lots of plans and projects are on the go already.